"Success is never final and failure never fatal.
It's courage that counts." 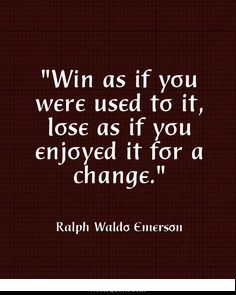 I was about 8 or 9 when I first read that quote and I must confess, it didn't make much sense to me then. I had never failed an exam or test, was top of my class, (actually, all my classes) and had pretty much succeeded at all I did. Success was a way of life for me and so I wrote all my exams not really bothered about whether I would pass or not. Topping the class had become more or less a norm and my new obsession was getting perfect scores.

All that was about to change and then only would the quote make sense to me. I left elementary school and got into secondary school (high school) and suddenly wasn't top of my class or year anymore. What a shocker! Well, after a while, that wasn't so bad anymore. The guy who beat me to both top of class and year was my best friend and he's really smart! I quickly adjusted to my new role of second best which was still cool but that even couldn't prepare me for the biggest shock of my life at that time.

I had begun to develop an interest in music after being shipped along with my brother, who at that time was quite interested in it, to music classes. We both took lessons for a year and at the recommendation of our music teacher, sat for the MUSON Grade 1 Music Theory exam. Looking back now, I'm still really lost for words as to what could have gone wrong. We prepared very well for the exam, got good scores in our practice tests, and as a result, were really confident about getting really good grades. My brother unsurprisingly passed with a Distinction while I failed. I remember my brother breaking the news of my first failed attempt and it was like a part of me died that Tuesday night. I sat on the floor just beside my bed and cried my heart out till I fell asleep. I couldn't talk or eat that night and remained very moody for days. I had never felt that depressed and then the message in the quote became really clear to me. I had had so much success I thought it was final but then failed and had to decide if I would let my failure would be fatal. I almost did. I continued to take music lessons but couldn't bring myself to write any music exams - not till I graduated from high school with my mind firmly set on studying music. Even then, I was still very scared of going back in to write any music exam. 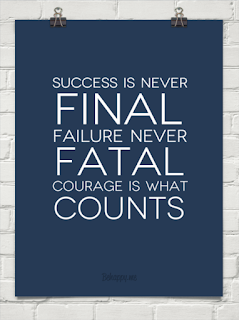 Anyway, I found the courage the author of the quote was talking about, faced my greatest fear, and wrote the Grade 5 music theory exam. Somehow, I didn't fail. I didn't get any of the good scores I had grown so accustomed to receiving and I was once again disheartened. At that point, I almost quit and said to myself, "Maybe this music isn't really for you". But the voice of truth wouldn't let me. He said, "Go back in, give it another shot!" And I did. I prepared and went back in for the grade 6 exam and passed with a distinction. I saw my actual score - it read 96.5% - and nearly passed out. The rest they say is history. I went on to study on a scholarship from the MTN Foundation, graduated top of my class, took home the top prizes and started teaching at MUSON. By the time I graduated, I had three Grade 8 certificates in three different disciplines from the Associated Board Royal Schools of Music, London and the Trinity College of Music, London.

In this journey of mine, I've also come to the conclusion that neither success nor failure is fatal. It's truly courage to continue that counts. I hope this post of mine has inspired you to reach beyond whatever failure you've experienced or are currently experiencing for the success that lies on ahead.


P.s: Please look out for the follow-up post to this. I'll be sharing my perspective of what courage is. Also, feel free to leave your comments below and follow by email to have subsequent posts delivered directly to your email.


Towards a better humanity,
Diazno
Posted by Diazno at 5:29 PM