It was a sunny afternoon somewhere in Surulere, Lagos. Big bro and I were returning from one of his training programs at City Hall, alongside some of his staff. We were reviewing the day's activities and then, it happened! A truck pusher going about his business nearly collided with our car and if not for my brother's presence of mind and expert driving skills, we probably would have been parked on the side of the road re-enacting that all too popular scene that plays out on our Lagos roads.

My first question, which I didn't bother asking by the way was, "Is that man blind?". It didn't look like he had lost control of the truck he was pushing; it was obviously a case of someone almost ramming into our car for 'no good reason' - that I couldn't understand! But understand I did, because the first statement my brother made was, "Can you imagine? He's moving forward yet he's looking backwards". It was a simple statement that helped me make sense of not just the 'almost-accident' we narrowly escaped from, but also of life in general. And to this day I have never forgotten that statement: 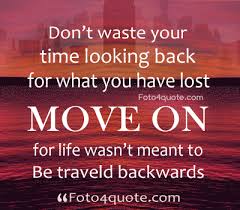 Why do our feet point forward? Why are our eyes in front? Why are the rear view mirrors in cars so small? Why is the front windscreen in cars comparatively larger than the rear windscreen? Why is it easier for us to navigate moving forward as opposed to moving backwards? It's clear that life was designed such that we are constantly moving forward, at least, ideally. So, what happens when we 'focus' on what's behind even when we're moving forward like we should be - we crash into stuff or crash stuff or much worse get crushed by stuff! Not such a nice thing, yeah?

The sad truth is that many of us are guilty of the 'moving-forward-but-looking-backwards' syndrome. We rightly divine that 'forward' is the right direction and begin to move in that direction but sadly, our eyes aren't pointing in the right direction: feet forward, eyes backwards. It's a new year in a few hours and we all need to move on from 2015, with our eyes forward and on the road ahead of us so we don't crash.

I wish us all a prosperous 2016 filled with lots of forward motion.

I will write again.

Email ThisBlogThis!Share to TwitterShare to FacebookShare to Pinterest
Labels: Inspirational, Lessons from My Childhood