CUP OF WATER IN A DRUM

I decided to write this post to offer what little encouragement I can to others like me, who from time to time have to deal with some form of discouragement. Having had quite a bit of experience, dealing with discouragement quite, I think I can say that I understand just how destructive it can be. Discouragement is a defined as: 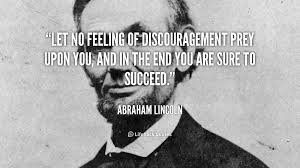 "a loss of confidence or enthusiasm; a feeling of having lost hope or confidence"

I have either heard of or seen quite a few extraordinary events and accomplishments that make me wonder just how powerful humans are and just how much we are capable of.  At the 2005 Champions League final match, I saw Liverpool turn around a 3-goal deficit against an AC Milan team that looked set for victory to lift the UEFA Champions League Cup and last year, many of us watched Leicester City do the impossible against a 5000 - 1 odds prediction to win the Premier League for the first time in their club history. I read of and watched (in the movie 'Jobs') the college dropout Steve Jobs, start Apple Computer Incorporated in his parents garage and turn it into a global brand. We saw Barack Obama, backed by what he calls "The Audacity of Hope", somehow win an election many had said a black man could never win, to occupy a position of authority many never believed he could. Now, he lives in a house, whose name at first hearing might insinuate was not meant for someone of his color to live in - twice.

Oprah was born to extreme poverty in rural Mississippi and brought up in inner-city Milwaukee, enduring abuse as a child. Despite this, she is the richest African-American of the past century, with a net worth of 3 billion dollars. Many consider her to be one of the most influential woman in the world today. John Paul DeJoria was born to Italian and Greek immigrant parents. This billionaire was forced to sell newspapers before the age of 9 so his family had food to eat. He also lived in a foster home, was a part of a street gang and jumped through a number of odd jobs. With a measly start-up loan of $700, he began what is now known the world over as the Paul Mitchell line of hair products. His net worth is over 2 billion dollars.

Haile Gebreselassie was one of ten children born in rural Ethiopia, forced to run 12 miles every day to get to school and back. He would later become one of most successful athletes in the world, with two Olympic gold medals in the 10,000m. Halle Berry was raised by a single mother in Cleveland, Ohio, even spending time in a homeless shelter while she tried to pursue her acting dreams in New York. As of 2014, she's still the only black woman to have won an Oscar for a leading role. 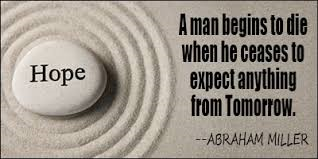 Countless other stories of extraordinary deeds performed by ordinary men and women abound, and after careful study of these stories and the circumstances surrounding them, I discovered that there is one common ingredient to all their success stories, apart from the fact that they started off in a disadvantaged position, of course. I found that ingredient to be hope - hope for a better tomorrow, hope that things would eventually turn around for them if they worked at it. These remarkable people all believed that where they started from didn't have to be where they would remain for the rest of their lives, and armed with such strong convictions, 'hoped' enough while working hard to get out of where they are. Today their stories teach us of perseverance, even in the worst of situations.

Once I read a story about a farmer who lived in Africa, who through information received from a visitor became tremendously excited about the prospects of discovering diamonds. Diamonds were already being discovered in abundance on the African continent and this farmer got so excited about the idea of finding millions of dollars worth of diamonds that he sold his farm to head out to the diamond line. He wandered all over the continent as the years slipped by, constantly searching for diamonds, his key to wealth, which he never found. Eventually, he went completely broke, threw himself into a river and drowned. 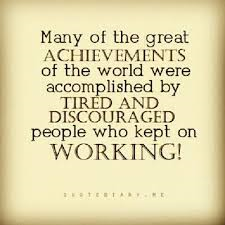 Meanwhile, the new owner of his farm picked up an unusual looking rock about the size of a country egg and put it on his mantle as a sort of curiosity. A visitor stopped by and in viewing the rock practically went into an excited frenzy. He told the new owner of the farm that the funny looking rock on his mantle was about the biggest diamond that had ever been found. The new owner of the farm said, 'Heck, the whole farm is covered with them' - and sure enough it was. The farm turned out to be the Kimberly Diamond Mine . . . the richest the world has ever known. The original farmer was literally standing on 'Acres of Diamonds' until he sold his farm.

The moral of this story is simple enough. Let's stop walking around feeling dejected and discouraged looking for a breakthrough because most times, we already have all we need. We just need to look within and refuse to give up hoping for a better tomorrow. Every little bit of effort we put into whatever work we do is like a cup of water going in a big, big drum. While one cup may not fill the drum up or do enough to lift your spirit concerning finishing the task soon enough, when we look into the drum, we must realise that every cup of water we've poured in is still in there and surely, with enough cups that big, big drum would be filled and run over.

For a better humanity,
Diazno
Posted by Diazno at 6:12 PM